You would think it is a reasonably straightforward question that is easy to answer however unsurprisingly there is a number of mixed messages we need to sort through to get the answer.

Here is a brief summary of what you will find in more detail below:

So what’s the answer?

You can use foil with a Breville Smart Oven but… you have to make sure the foil is nowhere near the heating elements. Ensure it is fitted securely and you are using the middle rack.

Let’s look at what Breville says about using foil in its smart ovens. This is in the support section for smart ovens on the Breville website so these instructions should be the safest to follow with the exception of not using foil at all…

How Customers Are Saying They Use Foil In Breville Smart Ovens

I have looked at the following smart oven and below is a list of related comments made by customers who are using foil.

*You will see people saying they are using foil to line the bottom of the oven to save cleaning. In the next section below you will see comments from a Facebook group saying this is a big No-No.

The comments below are what people are saying they are doing. It gives you an idea of what can be done – but that doesn’t make it right! 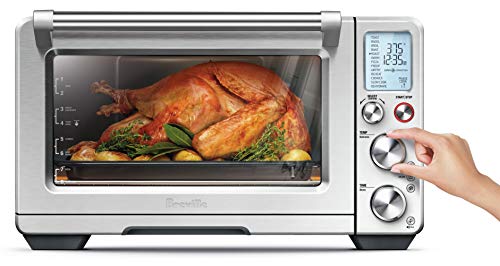 The only thing I do is line the bottom with heavy duty foil when I’m going to use the air fry basket or make homemade pizza. I have a tendency to overload the crust with toppings.

I stumbled upon an interesting conversation on Breville’s Facebook Page involving the use of foil. It kind of just adds to the confusion.

Here is a bullet list of the main points:

I also called the company who told me never to put foil or parchment inside because if it touches the element it can start a fire. And I’m not supposed to put foil containers in it either to cook she said.

Aluminum Foil Has The Potential To Spark

While cooking with foil is a convenient cooking method, the high temperatures reached inside the Smart Oven can cause an aluminum foil package to become electrically charged and spark when placed on the top of the oven.

While it is common knowledge that regular foil is not flammable, aluminum foil is quite flammable.

Foil is made of metal, which conducts heat very well.

When you touch an aluminum foil that is heated, you feel that the heat is mainly conducted through the thin layer of metal instead of being lost through air conduction.

So… while it would be extremely rare the possibility exists of the foil being an excellent conductor of heat will elevate the temperature inside your oven causing potential issues.

In summary, the best advice is what was stated earlier by Breville themselves.

Use oven-proof baking dishes, roasting pans, pizza pans, or cookie sheets with very low sides, and place on the center of the Wire Rack to let maximum airflow reach the food.

So look for alternative ways to cook without using foil. Remember the Smart Oven is already designed to cook 30% faster than conventional ovens and restricted airflow is really restricting the ability of the oven.

You are basically transforming your Smart Oven back into a conventional oven.

You may also be interested in… Why The Breville Air Fry Smart Oven Is The Best Countertop Oven and Can You Put Foil In Your Air Fryer? (If So How and Where?)