What Is the Best Water To Use in a Steam Iron?

The best water to use in a steam iron is distilled water. Water with many minerals, such as tap water, can cause mineral build-up in the steam iron. This can cause it not to work correctly. While using tap water in your steam iron won’t break the iron, distilled water is still the best option.

Fill your steam iron with distilled water instead of tap water to prevent mineral buildup from occurring inside the unit which may affect the performance of the steam iron.

You will know that your steam iron is working properly when you turn it on and steam begins to come out of the holes on top of the unit. If you notice that your iron appears not to be producing any steam or you have to press down hard on clothing while using it, then there may be a problem with mineral build-up inside the unit.

The rest of this article will discuss various types of water and whether they’re safe to use in a steam iron. I’ll also compare the differences between the water types, and explain why they might not be the best choice.

Why Distilled Water Is Considered the Best

Distilled water is widely considered the best water to use in a steam iron because it’s the least likely to cause problems in the steam iron.

As distilled water is mineral-free, you don’t need to worry about mineral build-up in the steam iron, which can cause leaking or damage to the iron. Distilled water removes more than 99.9% of minerals in water (and bacteria, pesticides, and other contaminants), leading people to believe distilled water is the purest water to drink.

Because everything is removed from distilled water, it’s the least likely to cause you any issues when using it in a steam iron.

How Is Distilled Water Made?

You’re probably wondering why distilled water is the most recommended to use when it comes to steam irons. The simple answer? It goes through a lengthy process that makes it the only type of water void of all minerals and contaminants.

Distilled water is made by boiling water and creating steam. This steam is then collected, cooled, and returned to a liquid state, resulting in distilled water. It’s one of the purest waters available, as it contains no contaminants, bacteria, or even healthy minerals.

Below, I’ll go over whether other types of water can be or are recommended to use in a steam iron.

Can I Use Rainwater in My Steam Iron?

If you live in an area that receives a lot of rainfall, using that free water might seem like a good idea. Not only will you not have to pay for it, but you can get plenty of it during a downpour. However, what’s in rainwater, and can you safely use it in your steam iron?

You can use rainwater in your steam iron. However, it’s not as clean as distilled water. Rainwater goes through a similar evaporation process, but it catches particles in the air when it precipitates. While it’s safe enough to drink, it’s not the same as distilled water.

Many people prefer to use rainwater in their steam irons and other appliances to save money on buying water. Filtering the rainwater can remove dirt or debris to make it a little cleaner.

Can You Use Bottled Water in a Steam Iron?

Sometimes, using a water bottle in your steam iron is easy and convenient. However, depending on the type of water bottle you use, it might not always be the best option.

Can You Use Boiled Water in a Steam Iron?

Many people may believe that boiled and distilled water are the same thing. However, that’s not true. While boiling water is a process in making distilled water, there’s more to it than simply boiling.

You can use boiled water in a steam iron, though it’s not the best water type to use. Boiling water will remove bacteria, but more minerals will remain. Thus, you still run the risk of mineral build-up in your iron after using it for a while. Distilled water is still best to use in a steam iron.

Can You Use Filtered Water in a Steam Iron?

While many people may prefer filtered water over distilled water when it comes to drinking, it’s usually the opposite when using it in a steam iron.

Why You Should Use Newer Steam Irons

As technology continues to advance, we see more and more improved appliances that work to make our everyday lives easier. When it comes to steam irons, we’re seeing more of their kind capable of safely using various types of water. 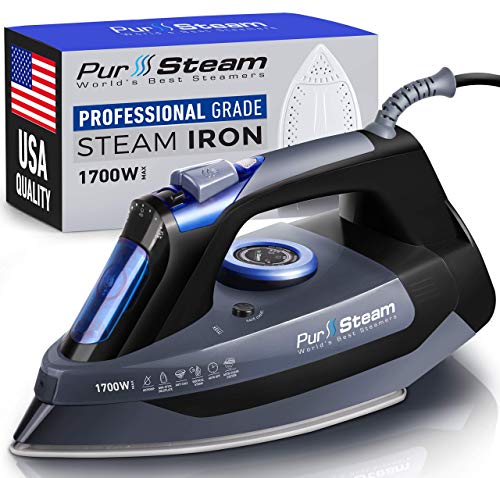 Many steam irons are now made to handle hard water, such as tap water. Newer steam irons sometimes contain filters in them that work to filter out contaminants and minerals that could harm the iron. Therefore, these steam irons open up the ability to use cheaper water rather than buying distilled water.

However, many people will still prefer to use distilled water to (hopefully) prolong the life of their steam iron.

Distilled water is widely known as the best water to use in a steam iron. This is simply because it contains no contaminants or minerals that could build up in the iron.

While distilled water is usually the best water to use, many new steam irons today are built and operate differently, meaning tap water is safe to use in many of them. However, it’s best to read the manual to ensure which type of water the manufacturer recommends.

Although distilled is the most recommended, you can technically use other types of water, such as filtered, boiled, or even rainwater.

You may also be interested in… Can Steam Iron Be Used Without Water?, How To Get Rid of Algae in Your Steam Iron? and Why Does My Steam Iron Smell? (& How To Stop It)