The bending of branches and twigs to make furniture has been utilized throughout history. And while the primitive style remains popular today, the Bentwood style has taken it to another level.


"As an Associate of Amazon I earn from qualifying purchases made from links in this post."
Table of Contents hide
1) Thonet Bentwood Chair History
2) The Bentwood Chair Rises in Popularity
3) Modern Bentwood Chair

What is a Bentwood Chair? Quite simply it is exactly as the name implies.

The Bentwood chair is literally made through the process of bending wood. The wood is soaked in water or steamed so it becomes malleable enough to bend into beautiful curvy shapes. When it dries it retains the shape. 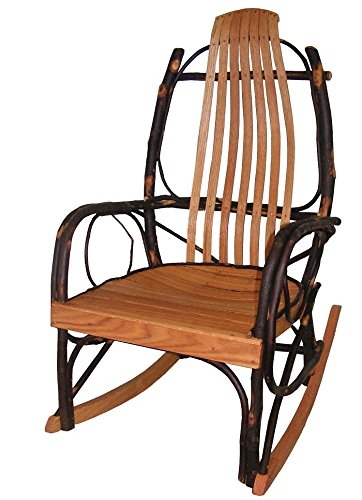 When we think of Bentwood furniture today, we are usually talking about those pieces with sweeping curves of dark smooth wood. Most people are familiar with the Bentwood Rocker; you may have one in your home.

While the concept of bending wood into furniture has been with us for ages, the form we recognize today was born in the 1840’s Vienna, Austria.

It was there that cabinetmaker Michael Thonet began experimenting with the concept and crafting designs with birch rods.

The basic techniques that Thonet developed are still in use today and are known as the Thonet method. Initially, the birch rods were soaked in water until they were pliable enough to shape into the desired form.

Ultimately, a steaming process was developed to shorten the time it took to render the rods malleable.

In the classic Bentwood chair the seat, which is typically made of cane or plywood, is the only piece not fashioned with Bentwood.

The Bentwood Chair Rises in Popularity

Thonet’s work was well-received, and his process provided some of the earliest mass-produced furniture. The Great Exhibition of 1851 in London featured his work.

The Thonet chair designs and the furniture style became popular throughout Europe and the United States, where they were sold extensively for the remainder of the century.

Even today, his original work is in demand, and the style Thonet perfected has never truly become obsolete.

Not only did Thonet’s improved process allow for the mass production of Bentwood furniture, but the products were also lightweight and easy to ship. They were also economical to construct and affordable for nearly every household.

The economy, grace, and convenience found in Bentwood furniture made it a popular choice in commercial and retail settings as well.

Cafe tables and chairs were popular with restaurants, hotels, and clubs, as were the straight-back chairs and rocking chairs. Every type of Bentwood furniture found its way into the stream of commerce and daily life.

In the 20th century, the style was adapted into the Mid Century design with a twist. Designers, taking advantage of new materials, began creating furniture styled with plywood formed in the same manner.

This modern take on a traditional style was every bit as well-received as the original.

These modern designs were not limited to shaped rods. Narrow panels could be formed into chair arms and legs.

Often, designers created seating molded from one single piece of plywood. The range of Bentwood furnishings in the Mid Century style is far greater than that of the original Bentwood furniture.

Modern techniques and materials offered a much broader pallet. This opened the door to the use of chrome tubing and materials such as Lucite to create contemporary furniture in the tradition of Bentwood.

Bentwood chairs have been popular with consumers from the very beginning. At times it has been the most popular design and at other times, less so, but it has always survived and remains popular today.

You may also be interested in… What Is A Saucer Chair