Are You Struggling With Your Cat Scratching Underneath Your Doors

Scratching is a natural instinct for cats. They scratch to remove the dead husks from their claws, they scratch to stretch and exercise their backs and legs and they scratch to mark their territory. Some cats even scratch as a form of play. And you may be surprised to know that your indoor cat is more likely to scratch than your outdoor cat.

The reason is simple: Indoor cats are less likely to have other ways to mark their territory, such as spraying urine or rubbing against objects. If your cat is scratching at the door, it’s because she wants something beyond that door.

To stop your cat from scratching the carpet under your door, you must first figure out what she’s trying to tell you with her scratching. Cats use scratching for many reasons: marking territory, communicating with other cats, getting attention, and removing the outer layer of their claws. Scratching also provides a good upper body workout for her.

Give your kitty plenty of acceptable items on which she can practice her scratching skills. Cats prefer vertical surfaces when they scratch and often choose the most expensive items in your home, such as doors and couches, as their personal scratching posts.

10 Ways To Stop a Cat from Scratching Underneath a Door

Knowing how to stop a cat from scratching under a door can be difficult as they are stubborn creatures and they’ll keep doing what they want until you find some way to stop them. However, there are some things that you can do that will help deter the behavior and give you peace of mind knowing that your cat isn’t damaging your doors anymore.

One of the best ways to start is by making the door less appealing. After all, if your cat doesn’t like it, then she won’t want to scratch on it. You can start by covering the bottom half of the door with something that cats don’t like. This could be aluminum foil or even sisal fabric which cats hate because it hurts their paws when they scratch on it.

2. Give Them Something Else to Scratch On

The other option is to provide your cat with something else that they can scratch on instead of the door. Since cats need to scratch, this should be their only option. Buy a few scratching posts and place them near the door or anywhere that your cat has been scratching. You can also invest in some cat furniture, which is a good idea if you have more than one cat because they often like to share the same scratching post. 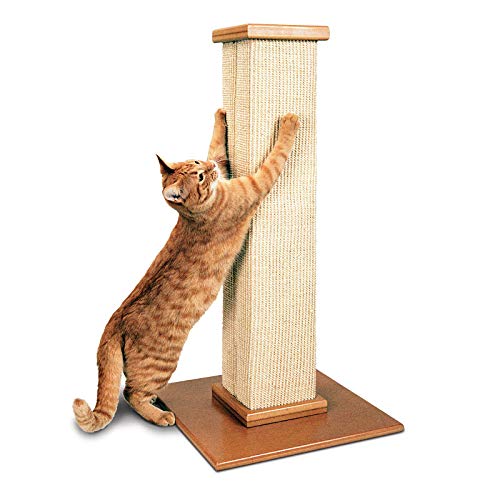 A scratchpad for cats – Your cat likes to scratch when they are bored or anxious, so providing them with something to scratch will encourage them not to scratch at the door! There are many different types of scratchers and toys that you can leave by the door for them to play with instead of scratching at it!

3. Install a cat door in the door

If your cat scratches at the door in order to go outside, consider putting a small window in the door so that they can see what’s going on outside. This can satisfy their curiosity and help stop them from scratching at the door.

This might not be practical for everyone, but it can work if you can find one that fits your door perfectly and has enough space for your cat to get through it. Make sure you’re installing this type of door on the right side of your house though; otherwise, it won’t work properly!

Cats are smart animals who can figure out how things work very quickly – including doors! If they don’t like going under something, they will find another way around it without even trying hard at all!

4. Deter Them with Double Sided Tape

One way to deter your cat from scratching underneath the door is by putting double-sided tape on it. This will mean that when they go to scratch it, they’ll get a bit of a shock as it will stick to their paws instead.

You need to make sure that you don’t put it too close to the edge as this could stop your cat from getting back into their room completely and may cause them some distress (they could get stuck outside).

5. Let them go outside

Your cat may be scratching to get outside where they can play, explore and have fun! This is a really fun way for them to get exercise, so let them have some fun! You could also consider getting a catio (cat patio) if they enjoy being outside but you don’t want to risk losing them or having a neighbor complain about them!

6. Leave treats by the door

You can use this as a reward system if your cat has stopped scratching at the door. Leave treats by the door when they are not scratching and see if it encourages them to be good!

7. Use a cat repellent spray

You can buy these at most pet stores, but you can also make your own! Google ‘DIY cat repellent’ and you’ll be surprised by how many different people have tried it. You may have to try a few different recipes, but hopefully one will work!

8. Leave toys at the door

If your cat scratches at the door because they want attention, leaving toys at the door where you can hear them playing with them might help. It shows that there is something to do by the door and gives them rewards for being good. This works best in conjunction with other methods.

Put in a baby gate or something similar to block access from getting through there in general!

This is the most obvious way to stop your cat from scratching underneath a door, but it is also the most effective. You can buy a claw trimmer at any pet store, and they are easy to use.

11. Spray them with water

You know how cats hate water? Spray your cat every time she starts scratching at the door and maybe she’ll think twice before going back to it! This is a pretty effective way to teach your cat what not to do, but make sure you don’t do it too often or she could start associating you with unpleasant things.

12. Get A Door Draft Stopper

In summary, if your cat is scratching at the door because they want to go outside, you need to provide them with a better home where they can be happy and safe. Cats love being outdoors and it’s hard for them when they are stuck indoors all the time. However, many cats are injured, killed, or go missing when they are allowed to go outside.

If your cat is scratching at the door because they want to go outside, you need to provide them with a better home where they can be happy and safe. Cats love being outdoors and it’s hard for them when they are stuck indoors all the time.

You may also be interested in… Will Cats Poop on Artificial Grass?